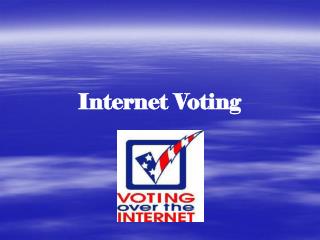 Internet Voting What is Internet Voting? Internet voting is : an election process whereby people can cast their votes over the Internet, most likely through a web browser, from the comfort of their home, or possibly any other location where they can get Internet access

Internet Voting - . a menace to society? jan meijer. power. you exercise your right to vote. if you are elligable

A Presentation on online voting system - . aim the main concept of this project to build a website ,which should be able

Voting Methods - . many ways to pick a winner. the way things

Online Voting - . good or bad?. 2000 presidential election . one of the closest contests in us history florida was the

Online Voting - . good or bad?. 2000 presidential election . one of the closest contests in us history florida was the