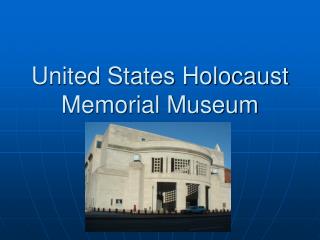 United States Holocaust Memorial Museum. Why?. “Bring to life the brutality of the Holocaust and movingly illustrate the terrible fate of Jews in World War II Nazi Germany.” . Goals. “Document, study, and interpret the history of the Holocaust” Memorial to millions of Jews killed in Holocaust

THE HOLOCAUST - . and contemporary. genocide:. connecting the dots in your classroom. andrew beiter , presenter ushmm

Children of the Holocaust - . by: only the best (emma and rebecca) . thesis

The Holocaust - . examine the statistics of the holocaust:. in what nation were most jews sent to the gas chambers?

Resistance Movements During the Holocaust - . a group portrait of some of the participants in the uprising at the sobibor

Nazi Rule - . hitler comes to power. in the early 1930s, the worldwide economic depression had hit germany hard , and

The HOLOCAUST - . looking through the eyes of those who suffered… lisa vanbeveren north syracuse junior high school

The Holocaust - . eq: how is genocide and other acts of mass violence humanly possible? 4/18. warning:. today’s lesson

The Holocaust Majority of information presented from the United States Holocaust Memorial Museum - . in the last months