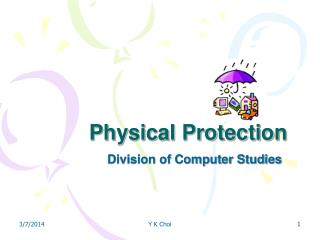 Physical Security - . it’s not what it used to be. a cissp candidate will be expected to understand the threats and

PHYSICAL SECURITY - . security survey. is the process of conducting an exhaustive physical examination and thorough

3 Which of the following related to physical security is not considered a technical control? - 1 what category of water

PHYSICAL SECURITY - . guards organizations. this force consists of personnel who are specifically organized, trained, and

Physical Security in the IT Environment - . patrick j. burns colorado state university. theme. “do what you can with

Physical Security - . chapter 15. the problem. plug laptop into network pda have an os with network support that can act