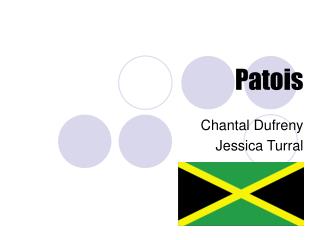 Patois. Chantal Dufreny Jessica Turral . Also Known As. Patwa Afro. Jamaican Jamaican Creole. “ungrammatical English” ?. Creole. Creoles are languages that form as a result of some human upheaval which makes it impossible for people to use their own languages to communicate

Jamaica - . by krishnan chandra. facts about jamaica. the main exports of jamaica are: sugar rum coffee yams and

Jamaica - . food. the jamaican food is usually very spicy . a typical lunch or dinner are plenty of food and last for

Jamaica - . an island nation of the greater antilles, 3 rd largest in the chain located in the caribbean sea, south of

All About Jamaica - . jamaica has beaches like many other caribbean islands. . this is the flag of jamaica. food ,drink

KP and DW - . reggae. popular music of jamaican origin having elements of calypso and rhythm and blues, usually with an

Jamaican Culture - . by aidan and michael . animals. mongoose the mongoose was originally from india. this animal is a

Jamaica - . by cerys john. jamaica is located in the caribbean sea, south of cuba, and east of haiti and the dominican