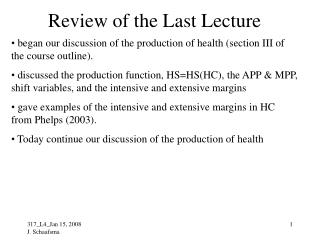 Review of the Last Lecture

Review of the Last Lecture began our discussion of the production of health (section III of the course outline). discussed the production function, HS=HS(HC), the APP & MPP, shift variables, and the intensive and extensive margins

Review of the Last Lecture

Lecture 3: Polar interactions - . what did we cover in the last lecture?. the force on an object is the gradient in

Review of the Last Lecture - . began a discussion of 3 generations of models of the practitioner firm almost finished our

Key points from last lecture - . many “inorganic” elements are essential for life organisms make economic use of

Review of the previous lecture - . money the stock of assets used for transactions serves as a medium of exchange, store

Summary of Previous Lecture - . the difference between the flow of funds statement and the statement of cash flows and

Lecture 21: Review - . review a few points about regression that i went over quickly concerning coefficient of

Randy Pausch’s The Last Lecture Toward a Plan for Embarking on a Successful Research Career Theme 4: Overcoming - S. d.

Review of Previous Lecture - . range the difference between the largest and smallest values interquartile range the

Cumulative Impacts - . what is a cumulative impact ?. ceq regulations at 40 cfr 1508.7 define cumulative