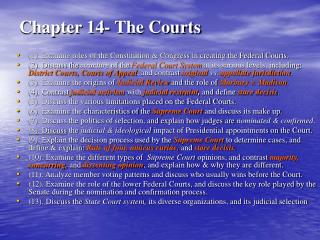 Chapter 14- The Courts (1). Examine roles of the Constitution & Congress in creating the Federal Courts. (2). Discuss the structure of the Federal Court System at its various levels, including: District Courts, Courts of Appeal , and contrast original vs. appellate jurisdiction .