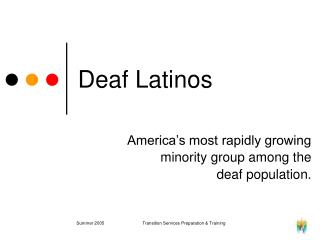 Latinos/Latinas - . immigrants and citizens. latinos are an integral part of the development of the united states and

Latinos in Utah - . 1. what country did utah belong to before 1848?. true or false. 2. latinos in utah were not affected

Ministering to Latinos - . alex gonzales, ph.d. how do you know you are latino?. you have at least one member of your

Deaf History - . from the milan aftermath towards the present. very important!!!!. after the 1880 milan convention, the

Deaf Culture - . knr 270. names and labels. deaf and dumb deaf person with an auditory impairment person who is hard of

Deaf Interpreters - . one of my roles as a di is to make sure that communication happens between the parties. its not

DEAF CULTURE - Presentation. deaf culture. what is it ???. deaf