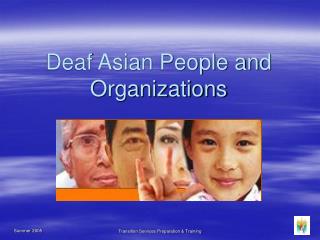 Deaf People and the Holocaust - . &quot;it's a great misunderstanding to think that the holocaust was only about

Assumptions and Expectations Concerning People Who are Deaf - . presented by: patricia mudgett-decaro august 23, 2004.

Deaf Culture = impact on employment? - . auslan. australian sign language recognised as a true language other than

American School for the Deaf - . 195 years of educating deaf and hard of hearing students established in 1817.

THE TIME IS NOW - A steep hill to climb: identifying the literacy crisis for deaf and hard of hearing students christine