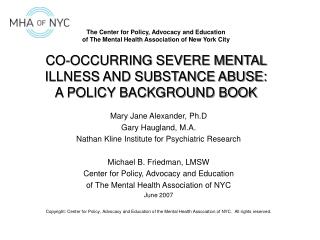 and Substance Abuse - Stress. and substance abuse. stress is inevitable… it is the body’s reaction to protect itself

Treating Adolescents with Co-Occurring Traumatic Stress and Substance Abuse Problems: Part One - This presentation is a

Substance Abuse, Co-Dependency and Family Systems - . the bowen system and the alcoholic/addict family by russell

IS THERE A CAUSAL RELATIONSHIP BETWEEN SUBSTANCE ABUSE AND PSYCHIATRIC ILLNESS? - . dr martin frisher department of

Substance Abuse and co-occurring disorders - . by brittany murphy. treating substance abuse is more complicated than a