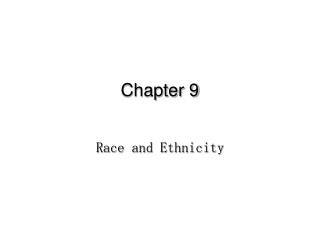 Chapter 9. Race and Ethnicity. The Burden (or Privilege) of Race. PAGE 276 : Excerpt from “DAYS OF GRACE” by A. Ashe. Race as a social construction. Biologically speaking, because of the blending of people from different parts of the world, there is no such thing as a “pure” race.