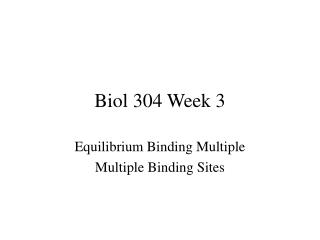 Biol 304 Week 3 Equilibrium Binding Multiple Multiple Binding Sites Last week we discussed the mechanism for the reversible binding to form a binary complex AB from its constituents A and B. The mechanism was treated as a dissociation of the complex into its constituents.

Equilibrium - . {15.1-15.4 introduction to equilibrium. what is chemical equilibrium?. the dynamic state of a reaction in

Economics Week 7 - . this week , exports and imports ( macroeconomics ) week 8 – review of all material covered by mr.