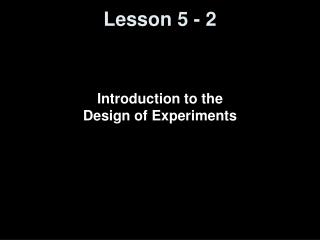 Lesson 5 - 2. Introduction to the Design of Experiments. Knowledge Objectives. Define experimental units, subjects, and treatment . Define factor and level . Explain the major advantage of an experiment over an observational study . Explain the purpose of a control group .

5-2 Relations - . objective: to identify the domain, range, and inverse of a function and to show relations as sets of

Lesson 5 - . using matrices to organize data and to solve problems. matrix. a matrix is a rectangular array of numbers.