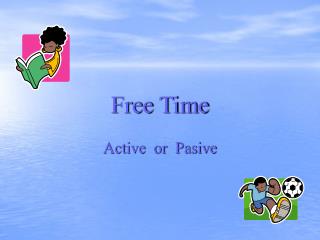 Free Time. Active or Pasive. This is a survey of free time habits among teenagers that we are going to deal with:. What teenagers do in their free time. If they smoke or drink alcohol. If they practise sports. If they know the conditions of practising sports. Free Time - . by Łukasz kordoń &amp; bartek kieś. i really like volleyball, so during my free time i often play it

Free Time - . pupils have free time after the lessons, on saturday and on sunday, on holidays. playing computer games. it

Free time - . from reyc 9. why did we ask these questions

Free time - . simona januvová. i can bowling. i play bowling this is a great hra. ican´t bastekball. i can´t

Free time - . it helps people to be strong. it makes us healthy. it helps to forget about every day's problems. it makes

Free Time? Time for Freecell - Games of solitaire are becoming increasingly more popular, especially since there are so

My free time - . i play football. i play computer games. i go shopping. i play

OUR FREE TIME - School number 4 presents. our free time. hello! we are pupils of 10 th form from school № 4 in

Reinvent Your Free Time - How to…work with…. reinvent your free time. what is give it a go?. an exciting activities

FREE TIME IN HOLLAND - . lukas artim hanka suchackova. afternoons. in the afternoon you can do: go swimming be on the