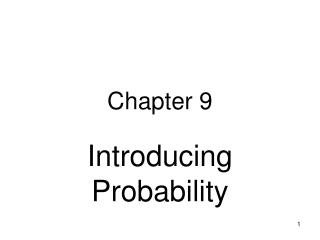 Chapter 9. Introducing Probability. From Exploration to Inference p. 150 in text. The Idea of Probability. Example: A random sample of n = 100 children has 8 individuals with asthma. What is the probability a child has asthma?. Probability helps us deal with “ chance ”

Chapter 9 - . community relations and strategic philanthropy. chapter objectives. to describe the community as a