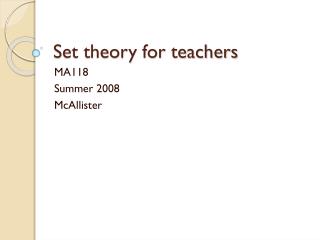 Set theory for teachers. MA118 Summer 2008 McAllister. Background of set theory. Georg Cantor (1845-1918). Big component of ‘new math’ curriculums that were pervasive in 60’s and early 70’s. The most fundamental of concepts upon which all of mathematics is grounded Set Theory - . section 2.1 tuesday 20 may. definition: a set is an unordered collection of objects, called the elements

Set Theory - . information. sets and elements. a set consists of objects or elements. the elements can be numbers,

Contextual Teaching and Learning - . some questions. what is the purpose of the educational system today and in the