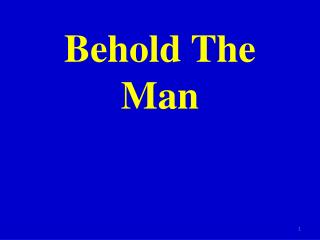 Behold The Man. Jn. 19:5. [5] Then came Jesus forth, wearing the crown of thorns, and the purple robe. And Pilate saith unto them, Behold the man!. The “man” of whom Pilate spoke was Jesus the Christ Pilate had made some 4 attempts to release Jesus

Angels and Demons - . the names of angels. mal'ak angelos sons of god holy ones watchers spirits the assembly the

Behold - The birds of the heavens. behold. jesus and anxiety. anxiety (merimnao) – merizo “to draw in different

The Man God Chose To Raise His Son - . and jacob begat joseph the husband of mary, of whom was born jesus, who is called

Habakkuk 2:4 Behold the proud, his soul is not upright in him; but the just shall live by his faith . - Living by faith .