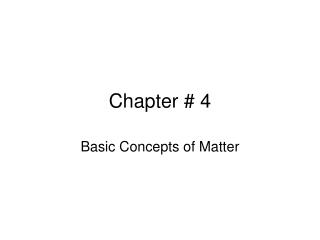 Chapter # 4. Basic Concepts of Matter. Matter Defined. Matter is anything that has mass and occupies space. Matter can be invisible. Air is matter, but it cannot be seen. Matter appears to be continuous and unbroken.

Statistics A Basic Introduction and Review - . statistics objectives. by the end of this session you will have a working

Basic Concepts of Financial Accounting - . chapter 2. the basic accounting equation. financial accounting is based upon

Chapter 4 Ecosystems: What Are They and How Do They Work? - . © brooks/cole publishing company / itp. key concepts.