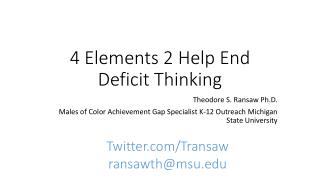 Heartfulness Magazine September 2017 (Volume 2 Issue 9) - In this issue, daaji takes us on the next stage of the journey Map and Chart review part 2 - . 40. which of the following shows the cities ranked from smallest to largest in 1850? a.

All problems are in the end emotional - . the majority of people come into psychotherapy because they experience

The Role of Memory in Learning - . let’s start with a little quiz question. which of the following are you likely to

PLAY AND AUTISM - . marisa lobo biddappa m.a. m.phil. what is play? play is a natural medium of a child’s expression.

Developing Critical Thinking in Our Youngest Learners - These are my slides from my session, developing critical thinking