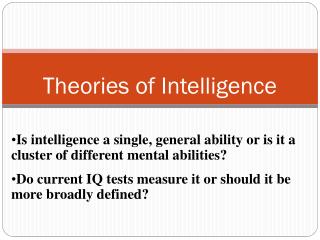 Theories of Intelligence. Is intelligence a single, general ability or is it a cluster of different mental abilities? Do current IQ tests measure it or should it be more broadly defined?. Definition.

Theories of Learning: Constructivist Theories - . dr. k. a. korb university of jos 19 may 2009. outline. overview of

THEORIES AND ASSESSMENT OF INTELLIGENCE - . intelligence defined. 1. what intelligence tests measure. 2. ability or

Multiple Intelligence Theories - . key: awl to study , low-frequency vocabulary. what is intelligence? what is multiple

Early Theories of Intelligence - . charles spearman believed intelligence is general people who are bright in one area

Theories of Delinquency - . what to look for in a theory. what are the central concepts (causes) is the theory