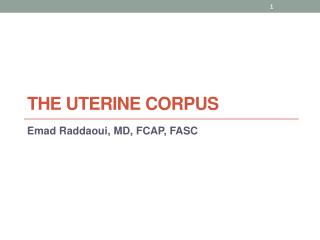 Benign Lesions of the Uterus and cervix - . benign disease of the cervix and body of the uterus is extremely common.

Uterine fibroid - . definition of fibroid. it is benign uterine tumour consist of smooth muscles ,it can present anywhere

Lymph-Vascular Space Invasion (LVSI) in Uterine Corpus Cancer - . what is its p rognostic significance in the absence of

Mesenchymal Tumors of the Uterus - Teaching hospital of the medical university graz. pathology. mesenchymal tumors of the