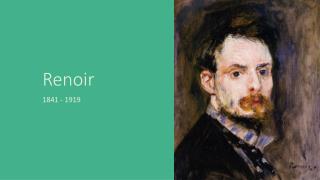 Renoir. 1841 - 1919. Renoir’s Background. Renoir was the only member of the Impressionists who came from a working class background. For many years before becoming an artist he worked in a Porcelain factory; decorating the china with little flowers.

What Does The Theater Box Mean to Renoir - In our genre corner , we offer painting of scenes from everyday life, of

France: Poetic Realism, Jean Renoir, and the Popular Front 1930s - . lecture 21. mode of production: how does the

Impressionism - Key characteristics : *captured a moment in time; a slice of life *interested in the fleeting effects of