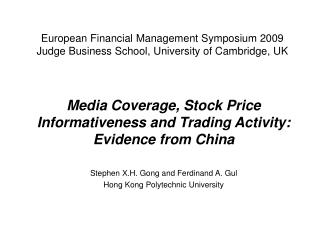 Philip Arestis, University of Cambridge, UK, and - The financial transactions tax: its potential and feasibility. philip

European University of Management - Eum. diploma. european university of management. the undersigned of the european

UNIVERSITY OF CAMBRIDGE - . introductiÓn. the university of cambridge is the most ancient second university after oxfor

Cambridge University - . welcome to cambridge university. now, let me introduce our university for

Cambridge Financial English - . blended learning. what is it and how it might help you?. what is a blender ?. a blender