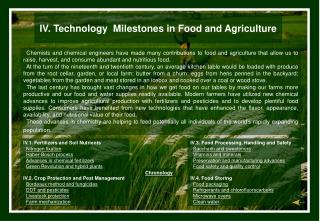 IV. Technology Milestones in Food and Agriculture. Chemists and chemical engineers have made many contributions to food and agriculture that allow us to raise, harvest, and consume abundant and nutritious food.

Food and Agriculture - . chapter 7, pages 152-175. the issues:. difference between food production and agriculture in the Food for Thought: The Globalization of Agriculture - . why is agriculture important?. much of the world’s land is

A big thank you to everyone who took part in our recent ‘Catchy name for our newsletter’ -  competition. we’ve

Food &amp; Technology - . fruits. origin. a fruit is the edible part of a plant that contains a seed or the matured

Technology and Agriculture - . economic impacts of advancing technology. how does technological innovation impact

The U. S. Farm And Food System - . to the dinner plate. from the farm gate. agriculture's role in the u.s.

HISTORY OF AGRICULTURE - . class i. why this course?. agriculture is important for india 62% population depend on