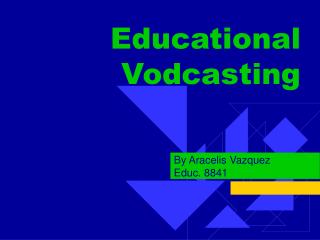 Educational Vodcasting. By Aracelis Vazquez Educ. 8841. Why it is necessary?. The Vodcast or video podcasting a high-quality learning resource to motivate students to develop their creativity and to learn in an engaging way. The use of Podcasting/Vodcasting in the Classroom - By: jessica davey, amanda carrigan, cassie henefield , brittany

Educational Technology: - How did we get here and where are we going?. by kim ramsey. educational technology: . image

Educational Research - . overview of qualitative research gay, mills, and airasian. state the definition and purpose of

Educational Innovations - . new ideas to make learning accessible for everyone!. will this fix the problem?. perhaps