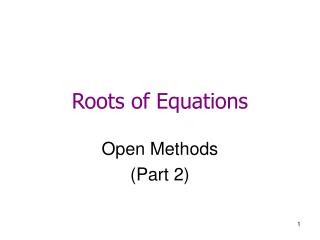 Roots of Equations. Open Methods (Part 2). The following root finding methods will be introduced: A. Bracketing Methods A.1. Bisection Method A.2. Regula Falsi B. Open Methods B.1. Fixed Point Iteration B.2. Newton Raphson's Method B.3. Secant Method. B.2. Secant Method.

1.5 Solving Quadratic Equations by Finding Square Roots - . (p. 32) how do you simplify radicals? what are the steps to

6.3 Solving Quadratic Equations by Factoring - . write a quadratic equation with given roots. roots or zeros of the

Finding a Quadratic Equation from Complex Roots - . write an equation from the roots. find the equation of a quadratic

6.5 Solving Square Root and Other Radical Equations - . p390. to solve a radical equation, isolate the radical and then

Engineering Computation - . lecture 3. roots of equations. objective: solve for x, given that f(x) = 0 -or-

Section 3-5 Finding Real Roots of Polynomial Equations - . objectives identify the multiplicity of roots use the rational

5.5 Theorems about Roots of Polynomial Equations - . p312-315. so this means that the possible rational roots have the