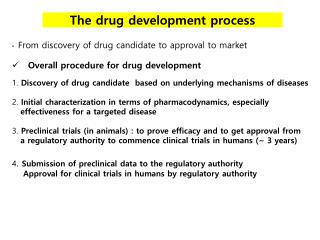 THE PROCESS OF DRUG DEVELOPMENT

Drug Development and Approval Process - . why new drug development?. to alleviate the signs and symptoms of new

Drug Development - . how are drugs discovered and synthesized. definitions. drug: any substance that alters a