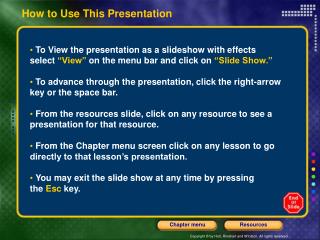 How to Use This Presentation

How to Use This Presentation. To View the presentation as a slideshow with effects select “View” on the menu bar and click on “Slide Show.” To advance through the presentation, click the right-arrow key or the space bar.

How to Use This Presentation FIN 3403 ACTUAL STUDENT SLIDE PRESENTATION Use this for ideas on your presentation - . notes on presentation. provide a

How to use the stages of change - . tara walton. the transtheoretical model. objectives. r eview the 4 constructs of the

PowerPoint Presentation Guidelines - . the following 37 slides present guidelines and suggestions for the use of fonts,

How to Use OTC Reports &amp; Resources - . 2013 oml conference. presented by: dana ratcliffe, city of weatherford -

Please read this before using presentation - . this presentation is based on content presented at the mines safety

Please read this before using presentation - . this presentation is based on content presented at the exploration safety

Introduction to OpenFOAM - . a tutorial on how to use dynamic mesh solver icodymfoam performed by: pirooz moradnia spring

How to Use a Triple-Beam Balance - . by john erickson. next. balance setup. move all three sliders so that they read