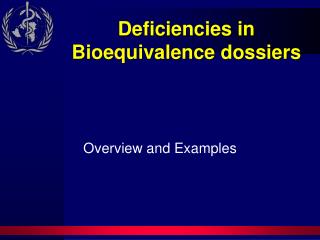 EVALUTION OF DOSSIERS IN WHO-PREQUALIFICATION PROJECT MULTISOURCE HIV/AIDS-DRUGS - . evaluation of

Quality of RH Medicines: Update from WHO Prequalification of Medicines Programme and beyond. - Quality of rh medicines:

Introduction to WHO Prequalification of Medicines Programme Essential requirements - . dr milan smid and many team

Experience with Prequalification of Dossiers (quality part) - . workshop on gmp and quality assurance of multisource

WHO Procurement, Quality and Sourcing Project: Access to HIV/AIDS Drugs and Diagnostics of Acceptable Quality

WORKSHOP ON PREQUALIFICATION OF ARV: BIOEQUIVALENCE - . introduction to the discussion of bioequivalence study design and

Bioequivalence studies for anti-malarials in the prequalification project: Outcomes and frequently encountered deficien

WHO inspections of Contract Research Organizations - . the prequalification

An Introduction to Process Improvement - . “ 85% of the reasons for failure to meet customer requirements are related