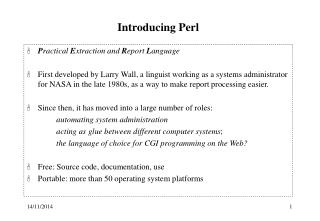 Introducing Perl. P ractical E xtraction and R eport L anguage First developed by Larry Wall, a linguist working as a systems administrator for NASA in the late 1980s, as a way to make report processing easier. Since then, it has moved into a large number of roles: Perl - . programming with the “swiss army chainsaw” of scripting languages. starting simple. we will start presuming

Perl - . a bit of history…. perl created in 1987 by larry wall. “perl was designed to work more like a natural

Perl - . file i/o and arrays. file i/o. perl allows to open a file to read, write, or append as well as pipe input or

PERL - . history. introduced in 1987 created by larry wall designed with the idea to incorporate parts of c, sed, awk,

Perl - . hour 4 lists and arrays. lists. list is a sequence of scalars surrounded by parentheses; items separated by