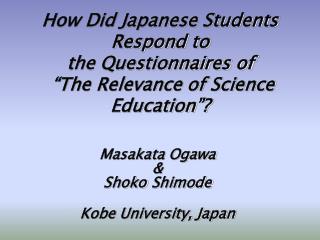 How Did Japanese Students Respond to the Questionnaires of “The Relevance of Science Education”?. Masakata Ogawa & Shoko Shimode Kobe University, Japan. Purpose of the Presentation. Not to Intend to Show an Overview of Japanese Students’ Responses to Each Items

THE KOBE EARTHQUAKE 17th January 1995 - . where is kobe?. kobe is in japan on the main island of honshu it is a large

Our Changing Earth: Kobe, Japan Earthquake United Streaming Video - . preview question what do you think is the most

“What Have the Japanese Learned from the Kobe Earthquake Experience” - . david w. edgington (geography, ubc). “what

From Asynchronous Cellular Automata to Nanocomputers - . ferdinand peper. national institute of information and

Japan’s Earthquake - . by: diana flores. what ‘s an earthquake. earthquake: rupture and sudden movement of rock along Kobe Earthquake - . where is japan?. japan is lies to the east of china and korea in the pacific ocean. japan lies on the