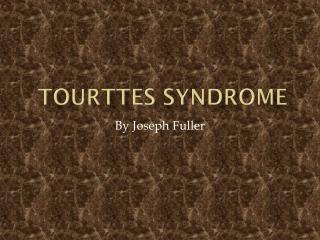 Tourttes Syndrome. By Joseph Fuller. What is it?.

Tourette’s Syndrome - . by ian williams. causes and transmission. the cause is unknown believed to be caused by

Tourette Syndrome (TS) - . ts is a neurodevelopmental disorder that is characterized by involuntary motor movements and

What is it like to have Tourette’s? - . taken from “that darn tic,” a children’s newsletter. characteristics .

What Is Tourette Syndrome? - . a neurological syndrome characterized by multiple motor and vocal tics with onset before