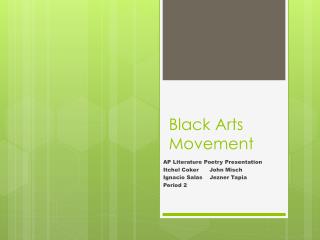 Black Power Did it help or hinder the Civil Rights Movement? - . fight the power!. students in the 1960s. fight the

Who were the Black Panthers? - Bobby hutton – aka – lil’ bobby. read about his life on p.79. what was so dangerous

The Arts, (cinema, music and visual arts) under Stalin - . by ximena aranda. proletkult. focus moved away from ‘high

Histoire des arts - . from gospel to hip hop: rap 3dp6. hip-hop is a cultural movement created in the 1970s in nyc that

“ Am Movement of Movements” II pgs. 16-20 - . terms. questions. what were some of the changes that occurred in the

Welcome to Visual Arts - . supplies. you are required to have notebook paper, a pencil, and a black gel pen. it is your

Movement in the Classroom - . ted 387 music methods dr. steve broskoske. this is an audio powercast . make sure your

ARTS and CRAFTS 1860 - 1900 - . the arts and crafts movement was an attempt to elevate the status of craftsmanship and

How far is it accurate to say that the Black Power Movements of the 1960’s achieved nothing for Black Americans?