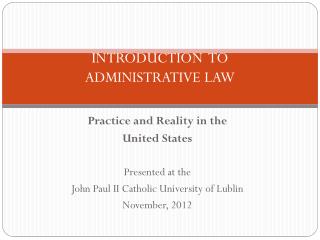 INTRODUCTION TO ADMINISTRATIVE LAW. Practice and Reality in the United States Presented at the John Paul II Catholic University of Lublin November, 2012. By way of introduction :. My name is Mary Lynne Donohue. I am from Sheboygan,Wisconsin, on the shores of Lake Michigan.

Administrative Ethics and Accountability - . lecture 17 – administrative processes in government. the origins and

Administrative Regulations and Rulings - . chapter 4. what do we need to know about “ authorities”. what they are

Introduction and Development Process - . peter gorm larsen. agenda. administrative information about the course what are