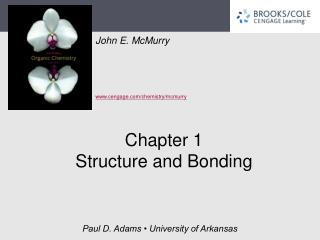 Chapter 1 Structure and Bonding. Origins of Organic Chemistry. Organic chemistry is study of carbon compounds. Why is it so special? 90% of more than 30 million chemical compounds contain carbon. Examination of carbon in periodic chart answers some of these questions. Chapter 1 Structure and Bonding - . what is organic chemistry?. living things are made of organic chemicals (carbon-based

Chapter 1 Chemical Bonding and Chemical Structure - . the branch of chemistry that deals with carbon based compounds

Bonding and Structure - . how atoms bond together. the bonds between atoms always involve their outer electrons. inert