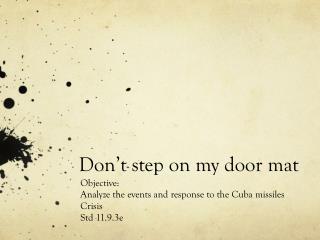 Don’t step on my door mat

Don’t step on my door mat

The 7 Habits of Highly Effective Teens - . habit 1: be proactive habit 2: begin with the end in mind habit 3: put first

Beyond the EHR: The Next Steps for Healthcare - . j. bryan bennett, adjunct professor and predictive analytics sme,

Habit 3 - . put first things first. not enough time to get it all done!. habit 2 – you decided what was most important

The 7 Habits of Highly Effective People Habit 2: Begin With the End in Mind - . c. kohn, whs based on the book by the

Prayer is Knocking on God’s Door - . vv. note: any videos in this presentation will only play online. after you

THE HUMAN DOORMAT - . when forgiveness and self-preservation collide. importance of forgiveness. the bible is abundantly

Habit – 5 Seek first to understand, then to be understood - . principles of empathic communication. habit 5 – seek

The Steps of Salvation - . four of the five steps of salvation we must continue to walk in so we may remain faithful to

Habit #4 Think Win-Win Based on the work of Stephen Covey - . is this picture a good one for think win-win ? why or why

Welcome to... - Welcome to. companion powerpoint presentation for the introduction to housing textbook. universal design.