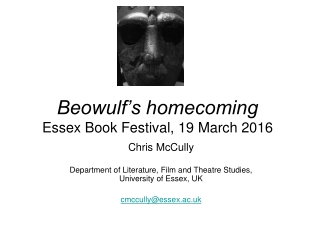 TEXAS BOOK FESTIVAL - . october 22-23 at the state capitol building. what is the texas book festival?. a free event where

Beowulf - Text and context. beowulf. beowulf. the old english language was mostly spoken, but it did have highly

Beowulf - . by: daniel dunn. twenty questions. 1. who is the father of shield sheafson?. beowulf hrothgar grendel

Comments on Beowulf - . 1. beowulf is a national epic of english people. 2. it is the representative works of the early

Birth of a Festival – Palm Springs Life - On march 18th, 2016, a festival was born. the palm springs life festival

Homecoming Dresses 2016 - Has the latest designs and colors with free