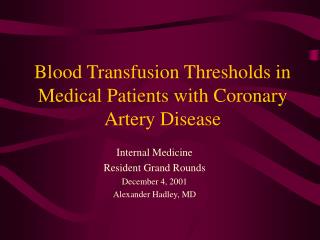 Coronary Artery Calcification : W hat It Means and How to Use It - A major teaching hospital of harvard medical school.

Single Unit Transfusion Guideline for Red Blood Cell Transfusion - . based on a restrictive transfusion threshold be

Management of Patients With Coronary Vascular Disease - . question is the following statement true or false? individuals

The Impact of Revascularization on Mortality in Patients with Non-Acute Coronary Artery Disease - . allen jeremias md

Massive Blood Transfusion - . massive transfusion, defined as the replacement by transfusion of more than 50 percent of a