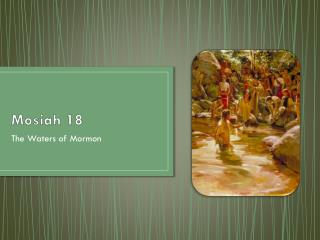 Mosiah 18. The Waters of Mormon. Where am I ?. Young girl: She has such pretty hair Young man: I can’t believe we beat Highland on Friday!!! Girl: John’s so cute up there. Golly was our date fun! Boy: I wonder why he didn’t take it. Huh, that’s weird, I thought he was good. Mosiah 4-5 - . becoming children of christ. the scale of the universe: http://www.numbersleuth.org/universe / read mosiah

Mosiah 2:16-17   Service - &quot;continue to seek opportunities for service.  don't be overly concerned with

Lesson 145 - . light in the darkness ether 3. mount shelem. the brother of jared went to great effort to prepare the

Mormon Beliefs About Salvation - . salvation according to