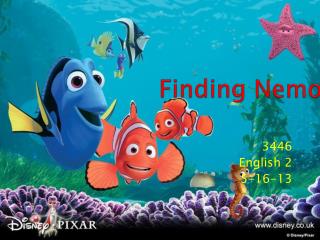 Finding Nemo - Characterization of marlin. finding nemo. analysis. marlin is over protective. has a lot of scenes where

Finding Nemo - . nemo was marlin’s only son. marlin loved nemo more than anything. marlin was ready to allow nemo to

Finding Nemo… - . by: kara carranza. back to my home page!!. life in the great barrier reef is full of dangers when you

Finding Nemo - Marlin and coral live in an anemone. finding nemo. the families of fish stay in the reef and live together

Findet Nemo - . finding nemo. wo ist es?. where is it. es ist wunderschön. it is beautiful. es ist schön. it is pretty.