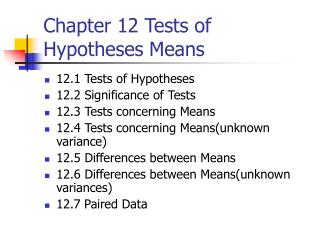 Audit of the Acquisition and Payment Cycle: Tests of Controls, Substantive Tests of Transactions, and Accounts Payable

Diagnostic Tests - . shurouq qadose. diagnostic and laboratory tests: are tools that provide information about the

Chapter 10 Testing and Debugging - . chapter goals. to learn how to carry out unit tests to understand the principles of