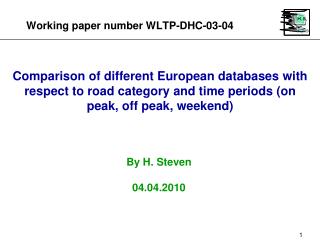 What I did over the weekend! - . urban botany and exploring new frontiers. international forest of friendship atchison,

Working paper presentation - . are housing benefits an efficient way to redistribute income ? evidence from a natural

Periods - . periods. one of the ways to organize phrases typically consists of two phrases linked together -antecedent

NGOs and CSR: Working together on eco-friendly European roads” - . kerstin meyer, 04 june 2012. what the eu does .

HOW TO REVIEW A PAPER FOR EUROPEAN UROLOGY - . stephen a. boorjian, md, facs professor of urology director, urologic How was your weekend? - . reading quiz on moodle? answers to gas law practice problems questions over the reading