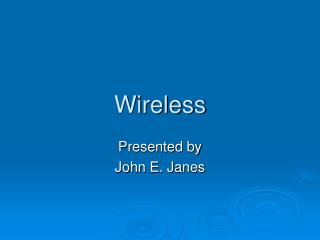 Wireless Presented by John E. Janes What is wireless? Anything without wires!! Common Uses Cellular phones and pagers -- provide connectivity for portable and mobile applications, both personal and business Step by step guide for wireless printer setup - Hello, we are techvaultsolution, we will release you from all kinds of

WIRELESS POWER TRANSFER IN 3D SPACE - . submitted by. introduction. the main objective of this project is to develop a