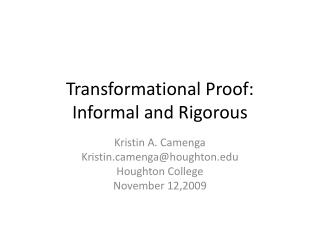 Transformational Proof: Informal and Rigorous. Kristin A. Camenga Kristin.camenga@houghton.edu Houghton College November 12,2009. Note: all slides, resources, etc. from this talk will be posted on my home page under “Teacher Resources” within the next week or so. Outline.

Assessing Informal learning - . how, what and why?. 1. can i ask you about assessment for learning? (deputy head). not

Proof Techniques - . some terminology . theorem : is a statement that can be shown to be true. axioms (postulates):

Proof Techniques - . chuck cusack these notes are loosely based on material from section 3.1 of discrete structures and

TO BE OR NOT TO BE – WHEN WILL INFORMAL DO? An update on informal wills under s18 Succession Act - Nqla conference –