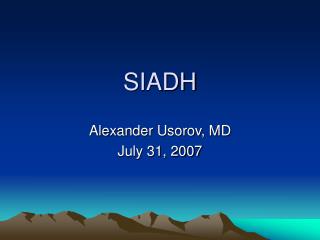 SIADH. Alexander Usorov, MD July 31, 2007. SIADH. Most frequent cause of hyponatremia First described by Schwartz et al in 1957 in 2 pts with bronchogenic carcinoma Arginine vasopressin was then identified. ADH. Synthesized in hypothalamus Transported down to posterior pituitary Sodium Disorders: Hyponatremia - The following is material that is not all dr. ciorciari's original thoughts and not

Syndrome of Inappropriate Antidiuretic Hormone (SIADH) - . objectives. the learner will be able to: describe the