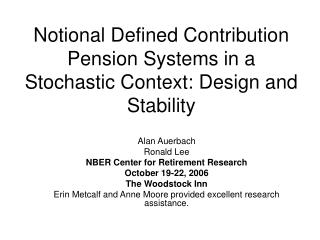 Jimi Hendrix at Woodstock - . caroline kenny. “something was tapped, a nerve, in this country, and everybody just

Pension Plan Design and the Modern Family: The Equities and Inequities of Pensions as - Family property and spousal

Entropy Rates of a Stochastic Process

Your Contribution to Our WSI - . welcome. welcome participants introduce self as host welcome &amp; introduce lisa Update on SC Retirement Systems - . may 7, 2012 tammy b. nichols. about the retirement systems. five defined benefit

Mortality Improvement: Trends and Implications for Pension Plans - . a resource guide for pension actuaries sponsored by