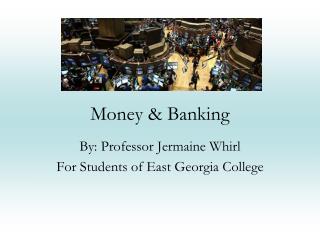 Money & Banking By: Professor Jermaine Whirl For Students of East Georgia College What is Money? Assets that people are generally willing to accept in exchange for goods and services or for payment of debts. Assets: Anything of value owned by a person or firm. Where did money come from?

Banking, Federal Reserve, Monetary Policy - . other tidbits . banking, money and the fed. what is money? why do we need

FINANCE - . that is my job. finance main ingredients. money in money out. money in = revenue = source of funds. money in

Finance - Savings and Investing - . fact. there are two kinds of money problems. which one do you want? not enough money?

Lecture 10 - . money and the banking system &amp; monetary policy. why are banks so heavily regulated? nature of