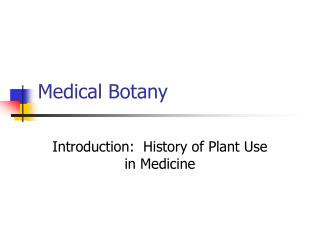 Medical Botany Introduction: History of Plant Use in Medicine Prehistoric times No one knows where or when plants first began to be used to treat disease Accidental discovery of some new plant food that eased pain might have been the beginning of folk knowledge

Botany - . botany is the study of plant life, including sunflowers. what is botany?. botany, also called plant science or

Medicine from Plants - . history. throughout human history, people have learned to use plants to help heal themselves.

The Botany of Desire - . hum2461 instructor: ericka ghersi. human being and nature. bees and flowers (coevolution)

Basic Horticultural Botany - . what is horticulture?. horticulture is the art and science of growing vegetable, fruit,