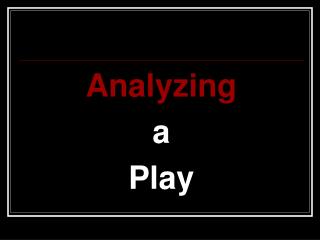 Analyzing a Play. Determine the style of the play. The style can be divided into:. realistic. realistic plays center on characters and action that create an illusion of real life. .

PARTS of a PLAY - . script. the written play is a guide for actors and directors. director. the director is the show’s

Latin American Independence - Why did the creoles lead the fight?. latin american independence. to remember when writing

Pretend Play - . peggy miller department of psychology university of illinois at urbana-champaign. pretend play. what is

Unit F: Muscular System - . analyze the anatomy and physiology of the muscles. specific objectives: explain the