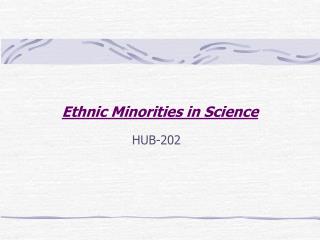 Ethnic Minorities in Science HUB-202 Course objectives To understand the history and culture of science in the United States, in order to understand the contributing factors that have led to the current under representation of ethnic minorities in science

General Science - . what is an earthquake?. earthquakes are one of the most powerful natural forces shaking and vibration

Jaunogre Secondary School Since 1972 About 530 students, 50 teachers Ethnic minorities - We carry out: the national

Responsible Conduct of Research with Ethnic Minority and Low SES Populations - . mark roosa. why is this important?

Addressing the needs of Black and Minority Ethnic BME groups in Primary Care - Structure of the presentation. review

Racial and Ethnic Groups Tenth Edition - . chapter 1 understanding race and ethnicity. what is a subordinate group?. a