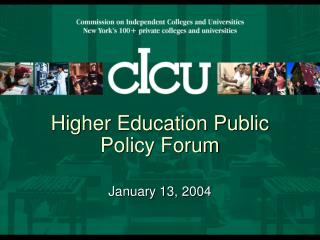 Higher Education Public Policy Forum. January 13, 2004. Who we are Why we are important Public perceptions of higher education The Sector and New York State: An interdependence. 2004-05 legislative agenda

Student Demographic Projections, Public Policy Questions and the Impact on Higher Education - . knowing who is (and is

Governance and management in higher education - . national seminar hosted by the lithuanian centre for quality assessment

The Policy Environment for an Institution of Higher Education - . typically consists of:. myriad separate policies